This litter came about as Blackie, the stunning dog that he was, would give Frenzy the substance and dark eyes that she needed. The lines matched up through Ch Eastaff Likely Lad – Imp UK. This litter was to be my litter back from giving Frenzy to Steve & Lisa Terry (Mobland) as she was the only bitch from her litter and I had given Frenzy to them on the condition of getting a litter back. I was hoping for a girl but ended up keeping a dog.

There were seven pups in this litter, six boys and one girl, unfortunately we lost one of the boys right from the start, a lovely black boy. What was unusual was that we had two reds, which from Pot Black, was very unusual but considering the red behind Frenzy is not unexpected and if you go back far enough in Blackie’s pedigree it is there on both sides. I was accused of letting Basty (Frenzy’s brother) get to her when she was in season but if anyone had seen Basty being used at stud they would laugh at that idea as he is not the best stud dog in the world to say the least and had never had an unassisted mating.

The other thing that makes me laugh about this rumour is why on earth would I jeopardise my entire breeding program as to let a brother / sister mating happen when I had just spent money on the stud fee of the dog I wanted to use. Why would I then use a dog from this litter back over the mother of the brother / sister if I did not believe the pedigree I had registered was true, let alone keep one whom I then bred from. Anyone who knows me knows I do not believe in close matings – each to his own, but a full brother / sister mating is not something I would ever contemplate.

This litter got off to a bit of a rocky start as Maddy (the pup’s grandmother) decided that she wanted to take over the litter at 3 wks and beat the crap out of the mother of the pups, Frenzy. I have never felt so horrified as arriving home that day to find that Mad had broken in the laundry door, there was blood from one end of the laundry to the other, poor Frenzy huddled in the corner, and Mad sitting proudly in the box with a bunch of terrified puppies. None of the puppies were hurt but all. I felt terrible giving back a beaten up Frenzy to her owners though but I wasn’t expecting that to happen, I will know better for the future to keep them all well and truly separated!

Now Mad had shown absolutely no interest in this litter at all until that point. As we worked out later – it was just one pup from this litter that she wanted – the foster pup. I had taken in a friend’s pup (Whatastaff Mad Frenz) as the mum had rejected her and they were around the same age. Mad had decided this pup was hers (at 3wks of age) and kept stealing the pup from the litter until we gave up and let Mad raise it. ( I got sick of trying to find this pup and remove it from the impossible hiding places that Maddy had hidden her, like under the inaccessible house sections resulting in me ripping up floorboards in a rented place). Maddy, being the maternal one that she is, got milk within days and raised the pup from 3.5 – 8 wks even though she did not have a litter at the time.

This litter did not result in any champions, which was a little disappointing, but what will be will be. Still there are some nice dogs from this litter which I am proud of and are behind every litter I have today. 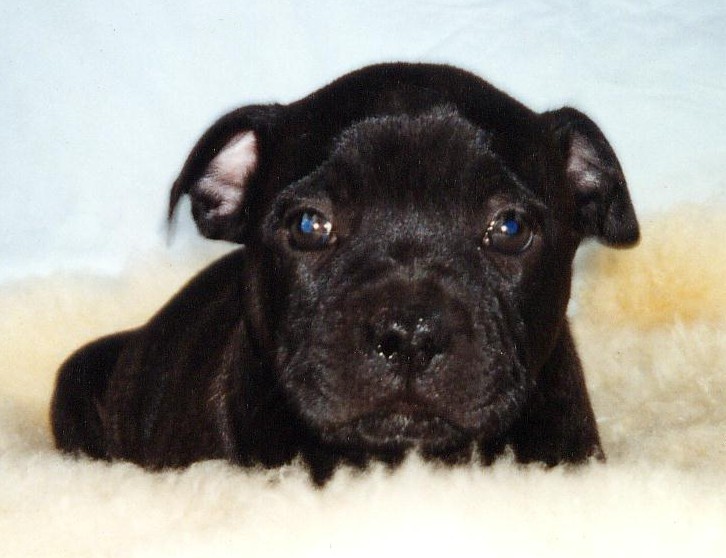 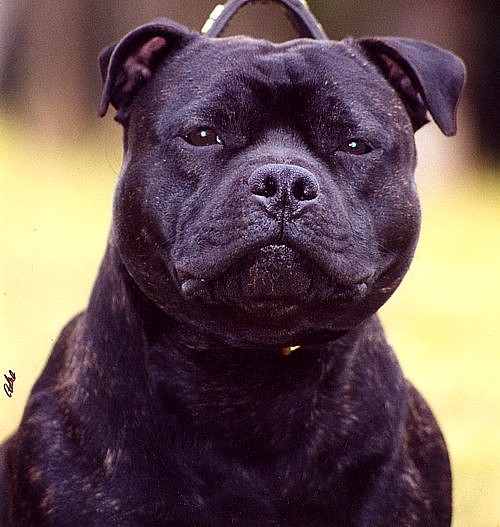 Ketl was named after the old saying “the Pot calling the Kettle Black” as he was the most like Pot Black as a youngster, as he has grown though he looks more like Frenzy’s side of the family. I kept him myself as a prospect as I was meant to send him to Rockhampton but did not as I was not sure if he was going to be suitable or not as his ears had not rosed and his mouth was looking dicey.

As it happened, his ears never rosed, well they do when Ketl wants them to and then he flops them at other times – usually when showing. It is a shame as they are the tiniest and thinnest, best placed ears you will find yet he is lazy with them. His mouth turned out to be tight but correct. Ketl was meant to go to a new home after the Victorian 2000 Stafford show, unfortunately he never made it there.

I went to my friends place Stella, on the way down to stay the night so we could travel together. On arrival that night there I let the dogs out of the van as they always know when we are at Stella’s and run to her front gate to get in to see her girls. That night for some reason (I found out later that there were pet rabbits let out at night across the road) they ran across the road, we called them back just as a car turned the corner. Basty stopped half way across the road when we yelled at them to stop but Ketl didn’t. The thump was very loud and we thought he was gone at first as he didn’t get up and run as they normally do. We pulled him off the road and took him to the Vets, he did not look good. His list of injuries were – head trauma – bruising to the brain, grazes to head, eye bruising, broken ribs, broken pelvis, broken front leg, both back legs broken, punctured lung, intestinal damage (a 30cm piece was removed), liver damage, kidney damage (one removed), grossly enlarged heart due to bruising and severe grazing down one side of his body due to being dragged. Needless to say the prognosis was not good.

We still went to Victoria the next day as there was nothing I could do at the Vets and I had to deliver a pup on the way down there and one in Melbourne when we got there. Ketl got worse as his kidneys were not functioning and I was worried about the long term effects of his injuries. Stella’s kids had been to see him every day and said he was flat as a tack and did not recognise them. I told the Vet to put him down but he wanted to keep him going to the next morning (at this stage 4 days after the accident) to see if he would improve at all, luckily for Ketl he did. Two days after that we were back from Melbourne and Ketl was well on the way to recovery, a miracle in anyone’s book.

I have a lot to thank Stella for as she looked after him for the next month as having three broken legs and a broken pelvis he could not get around that well (though he could still stomp on your foot well, hey Stella) and I was not living at a place that I could’ve looked after an injured dog that well – lots of stairs, slopes and rocks. Ketl came home at a year old and stayed until he was around 18 months when he and Basty decided they would not get on anymore. Then he went to a wonderful home where he is much loved and appreciated especially in keeping the burglars out! You would never know there had been anything wrong with him except for his slightly bent front leg and a bit of a wobble in the back end when he moves. He sired one litter for me, which is Litter 7 where our infamous Murtle comes from. 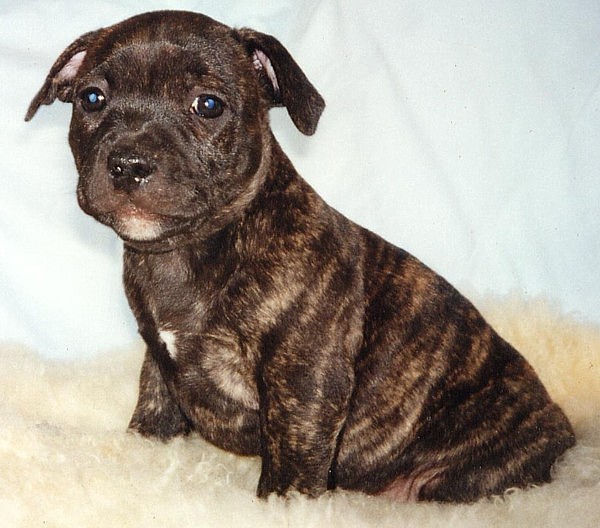 Toby was a nice pup, nothing to rave about but nothing to sneer at either. He grew into being very much like his uncle Angus. He was a standard sized dog, moves nicely and was a lovely brindle, decent head, good topline and decent bone. I did show him a couple of times but he absolutely hated travelling in cars and was not good at being separated from his “Dad”, Sid, so we were not too successful as he was usually too stressed out to show nicely and I decided that it wasn’t worth stressing him out.

He lived a life in luxury, being fed Meat Pies, Icecream and whatever else was going, long walks in the park next door and friends to play with. 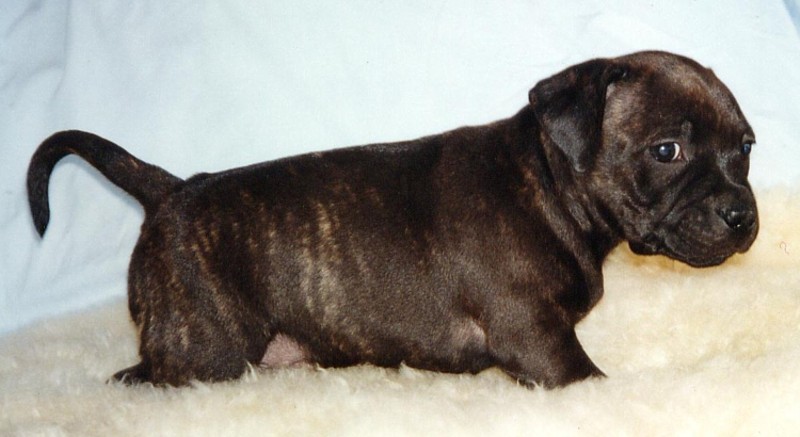 I will be honest & say that Drac was never my cup of tea, even as a baby. I had wanted to put him in a pet home but Scott really wanted him so off to Scott’s he went. He did alright for Scott in the show ring and Scott loved him so that is what counts. He sired a litter for Scott but unfortunately I never got to see any of them. 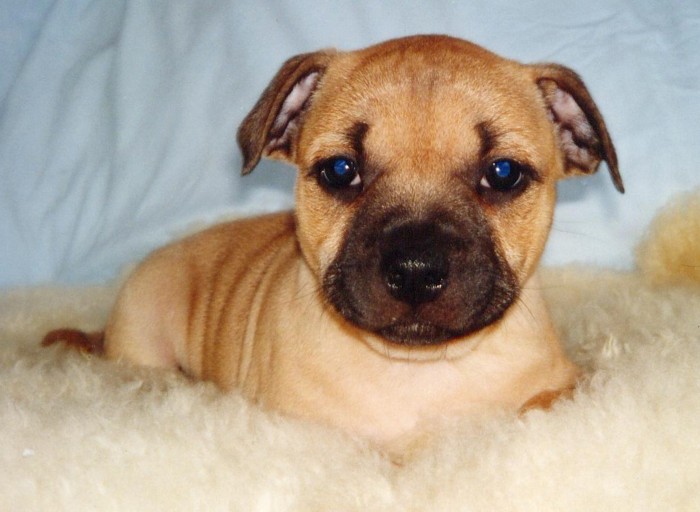 Manson was the big pup in the litter and Tullee had been in contact with me from Rockhampton and wanted only a red dog come hell or high water. Luckily for her there were two and from the photos she chose Manson. Though Manson was big by NSW standards I would say he would probably fit in in Qld. His one problem was his mouth which was a tad overshot as a baby but this corrected itself as an adult which I was grateful for.

I heard from Tullee and found out that Manson died at 6yrs of age chasing a bird, he jumped off a rock, landed incorrectly and broke his neck. A sad and unfortunate freak accident. 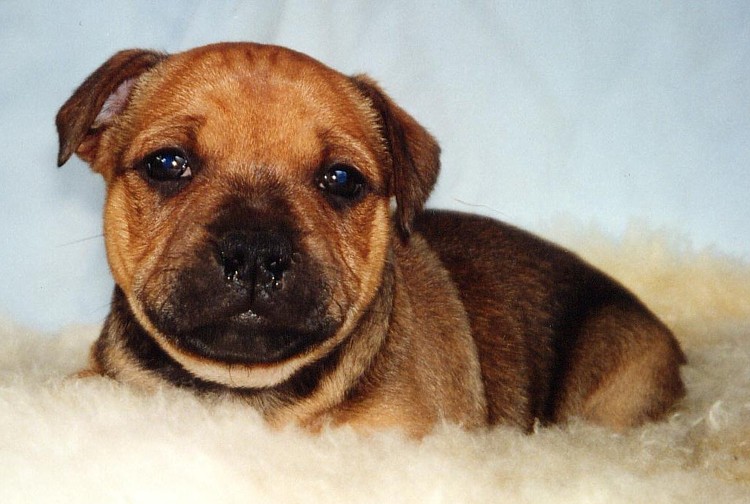 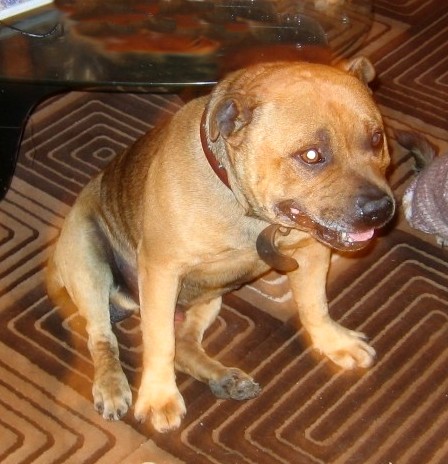 Cooper was my second pick of the boys, I lost touch with Robbie & Yvonne since they were babies and didn’t get to see him until he was much older. He was a red smut as a baby but most of that cleared into a glorious red.

He was shown as a baby but was not shown for long due to falling off the back of Robbie’s ute and doing considerable damage to his hind leg. From then he just a much loved pet within the Orr household. 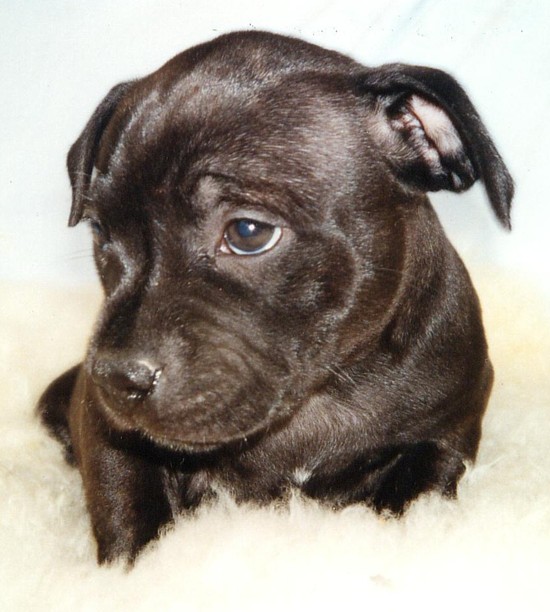 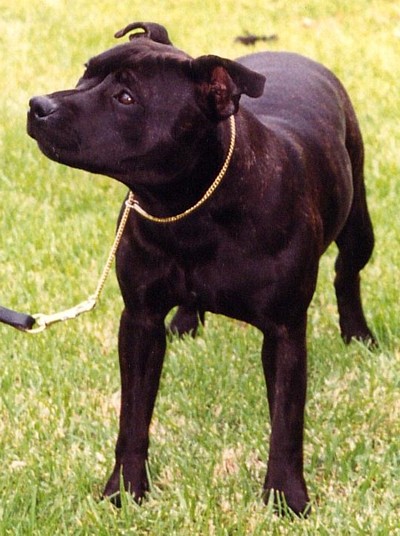 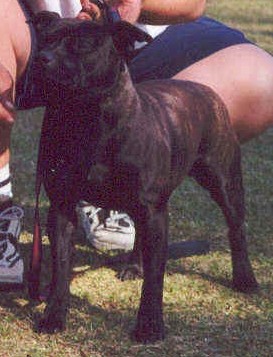 Gema was named after the Chris Isaak song of the same title which was important to me at the time. David fell in love with Gema from the start. I was going to hang on to her for her bloodlines even though I was not happy with her build so the condition of them taking her was that I was to get a litter back. This did not eventuate but luckily I still have the bloodlines as I used her brother.

Gema was a lovely but finer cast bitch, nicely proportioned and had lovely type but did not have the substance that I look for. She moved well, had a nice topline and lovely pigmentation. She has been shown quite extensively but due to an accident where she broke her hip she is now retired as she has a permanent limp. She did have some points towards her Championship title and won many Reserves and always placed well under specialty judges.  She had one litter for David & Louise under the Staffbach prefix before being desexed.

The one thing that Gema certainly excelled at though was Lure Days. She has won fastest dog on the day twice and I think fastest bitch another two times on top of that also. It is interesting to see that these lines can certainly run with both her uncles, Basty & Angus, taking out the honours at lure days also along with her nephew, Choppa, taking out the ACT & District Club’s first lure day. 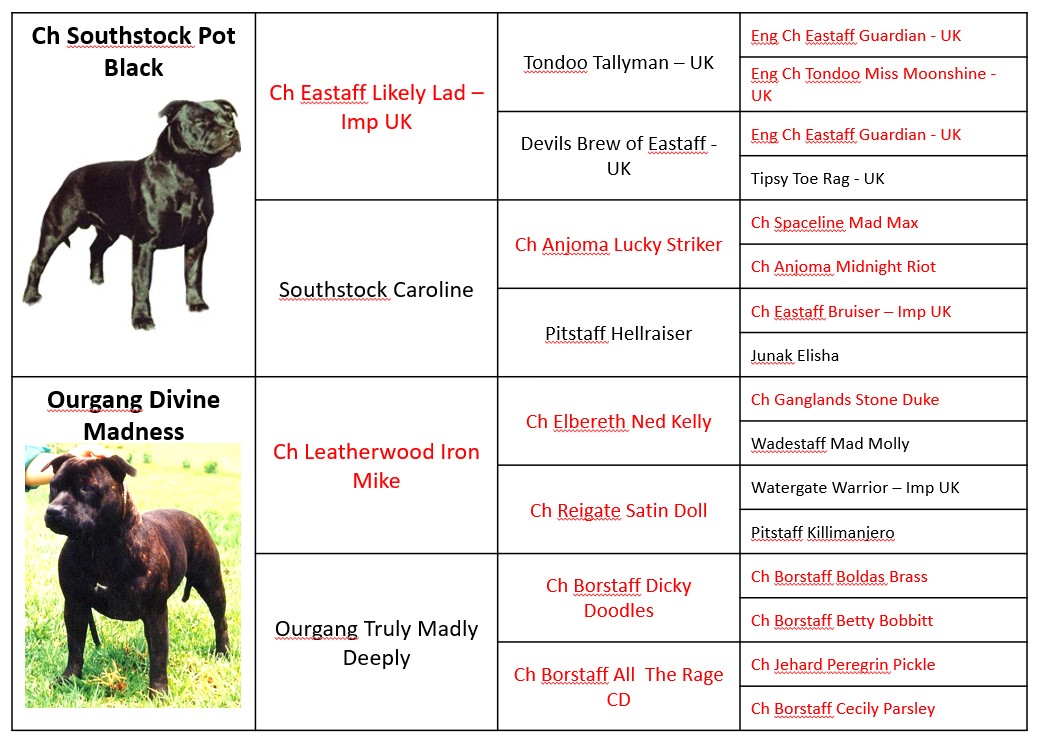