I did this mating as I was very impressed with Booker when I saw him as a Junior Dog at the Vic Stafford show. To put it simply, I thought he was absolutely stunning, it was a bonus to me that his bloodlines tied into what I already had in Rage so I planned this litter with great delight. Booker had a better topline and structure than Rage while Rage’s bone and head strength complimented. They didn’t double up on the same faults and added virtues to each other. The litter were named after Bushrangers & Rage.

This litter resulted in two champions – Ch Ourgang Boldjack Donahue “Jacko” & Ch Ourgang Fire N Brimstone “Brittany”. Three of the other girls were shown, Ourgang Black Bess “Bessy” who unfortunately went undershot, Ourgang Felony “Fels” who achieved over half her title however due to the owner’s change of circumstances was not shown to her title & Ourgang Still the Rage “Jessie” who was just a little too tall for most judges’ liking. The two other boys and one girl not mentioned are Ourgang Captain Moonlight “Mabo” who went to a home in the country, Ourgang Outrageous “Rani” who was a beloved pet and Ourgang Thunderbolt “Kuch” who was also a beloved Pet. Overall I consider this litter to be a great success but certainly not long lived as most did not reach double figures. 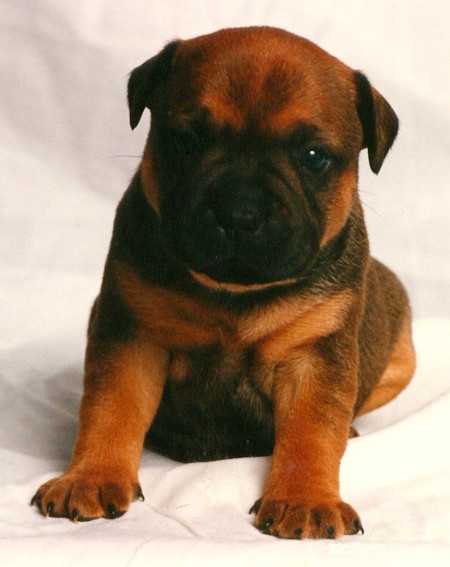 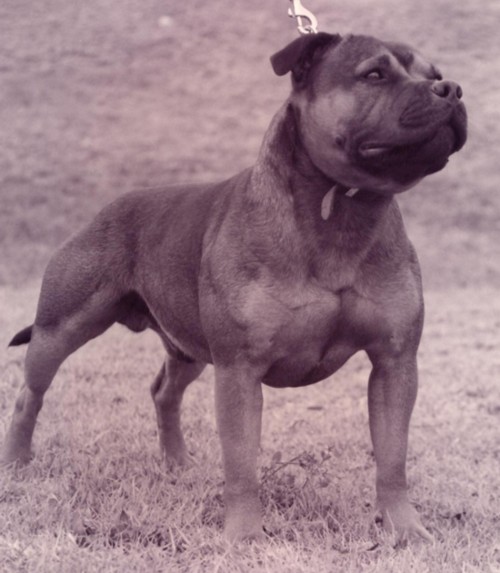 Jacko was to me one of the best dogs I have bred and was a pleasure to see, a great blend of Rage & Booker. He was highly under rated, both as a stud dog and in the show ring mainly due to his colour. He was a red smut (red with a black overlay) beautiful head, beautiful topline, moved well, nice tail set, great pigmentation.

My only regret is that I never got to use him myself as I only had his half sister at the time. As a show dog he still managed to achieve over 800 points, in spite of his colour, and it was a shame that he did not get a chance to achieve his Grand Championship title as he certainly deserved it. 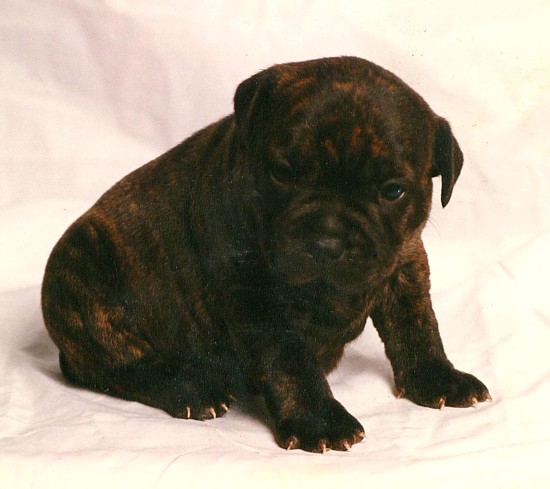 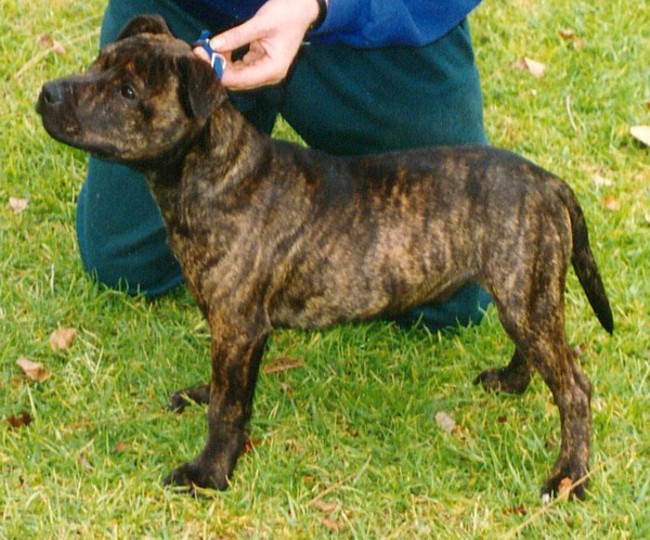 Mabo went to live the high life in the country, Eris being a local artist and previous owner of a Borstaff dog wanted another Borstaff bred dog so Linda put him onto me. Unfortunately, Mabo was drowned by a kangaroo at only 18mths of age, much to the devastation of the Fleming family. I was never able to see him as an adult and only have puppy photos of him. 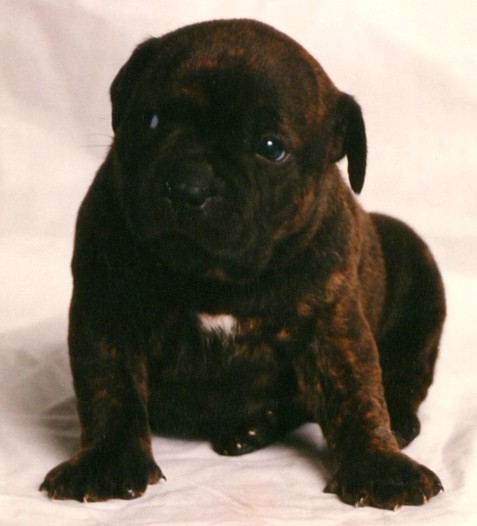 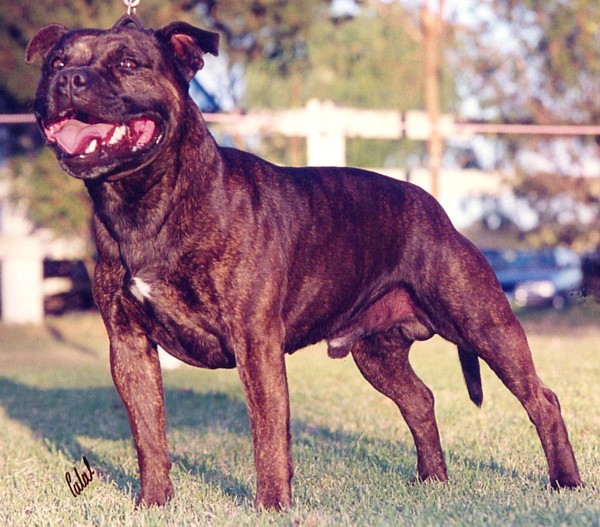 Kuch was a beautiful boy, very much along the lines of Booker, he was shown as a youngster and achieved a 20pt challenge his first show in Minor at 6 ½ months. Unfortunately his mouth went level, I showed him with limited success as an adult. Most judges cannot see past a flush mouth even though the rest of the dog was beautiful. 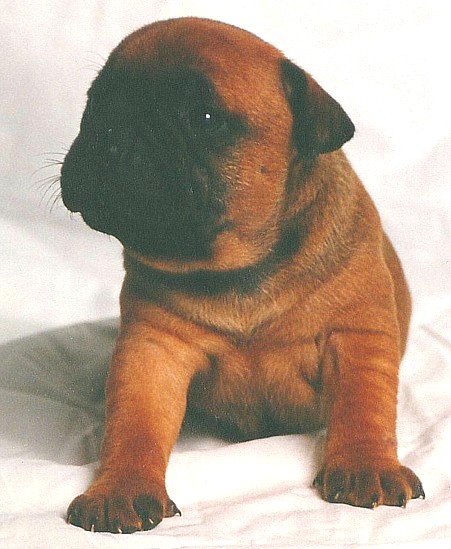 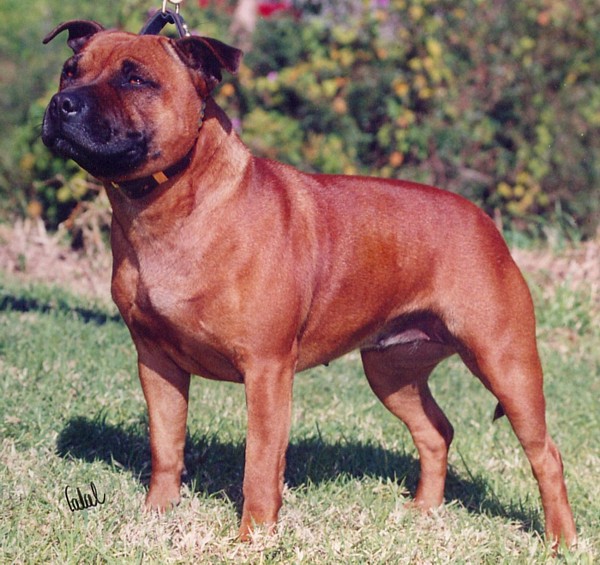 Britty Brat was the queen of the Deacon household and the star in Stella’s life. She is behind everything Stella bred and reigned supreme over her daughter “Sally” and grand daughter “Lizzie”. Britt did extremely well for Stella and was a beautiful rich dark red, again with a great topline, angulation and pigment. Britt certainly took after the Boldhart side and could not keep her tongue in her head to save herself trying to lick everyone that came too close, much admired by Booker’s owner Annette as being a ‘perfect’ bitch. Brit was sadly taken too soon with a brain tumour. 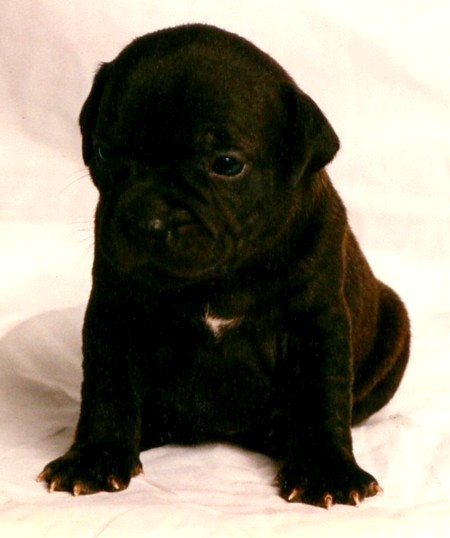 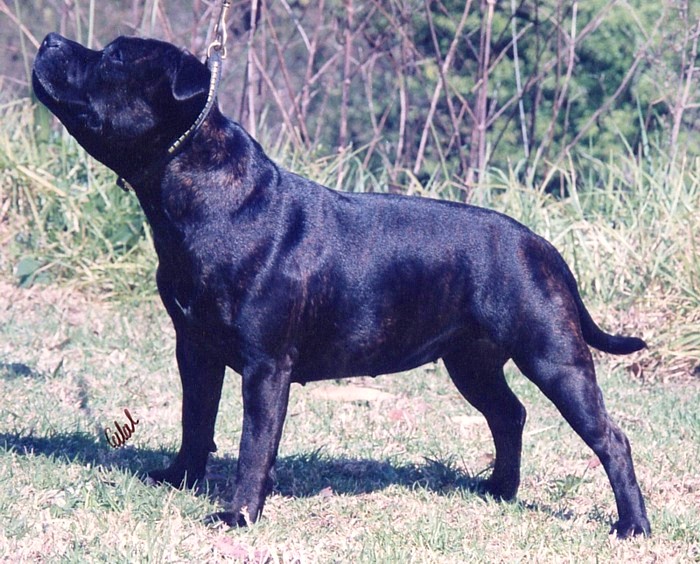 Bess lived with her brother Jacko all her life and was the bossy boots of the pair, absolutely stunning in every way except those little teeth at the front, unfortunately she went undershot after her first season which was a great waste as in all other areas she is beautiful. She was the queen of the household at Narelle’s, though a bit of a grump in her older years. 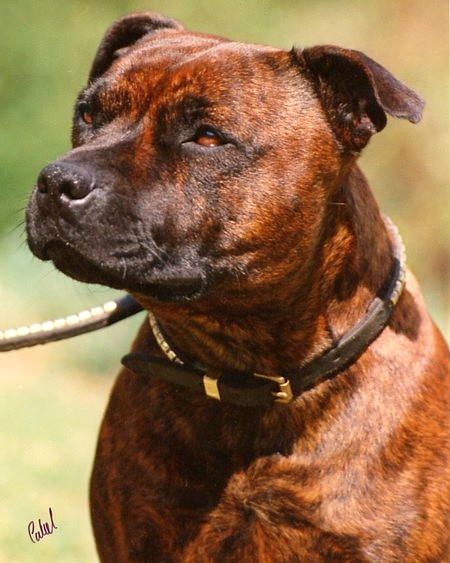 Jess was a bit of a plain Jane as a baby but grew into the most magnificent mahogany brindle you have ever seen as an adult. The main thing that grew were her legs and it wasn’t until she was around 4 years old that she really looked her best, as before that she looked taller than she was due to being all leg and no body. I showed her limitedly and she achieved reasonable results but was mainly overlooked because of her height. She is the mother of Litter 3 for Ourgang, an arrangement made with her owner Matthew to use my prefix. 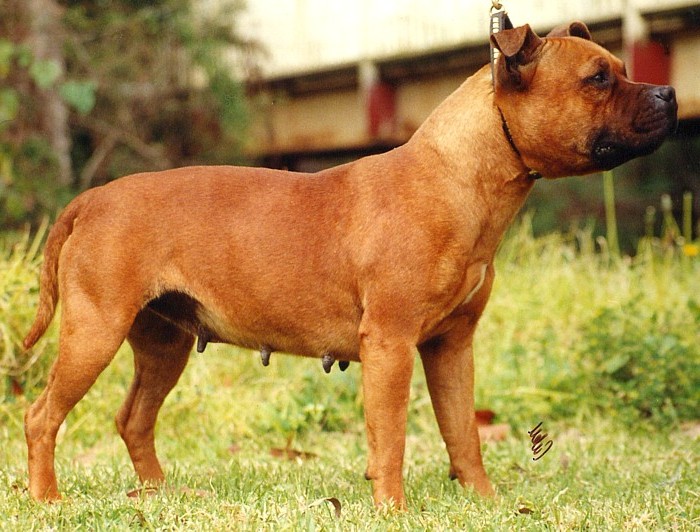 The story behind Joanna getting Fels is quite amusing. I was house sitting in Avalon and Sprog had decided to wander off down to the Butchers at the local shops. David and Vicki Atherfold having a Stafford of their own, Lucy, took her home and rang the number on the collar which was of course in Hornsby. Mum told them where I was staying and they brought Sprog back to me. They fell in love with the puppies and brought their daughter Joanna down to look at them, of course she bought one and that was Felony.

Fels was a red with a red head’s temper, she again took after the Boldhart side in her looks and had a great topline, nice angulation etc, her one vice was high ears which probably held her off from the top awards, still she managed to get over half way to her title. She had one litter for Joanna & then Fels was bitten by a snake when Joanna was heading over to WA to live in Broome. 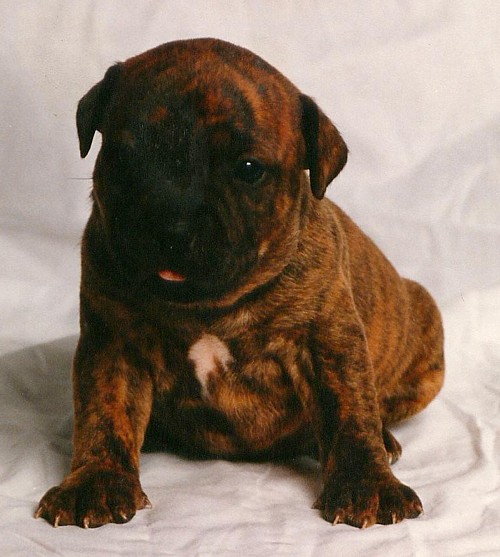 Rani was a beautiful tiger brindle like her father Booker and was much loved by Dean, she was shown as a baby but Dean decided that showing was not for him. She had one litter which gave Dean a beautiful boy but these were not registered due to mix ups in paperwork. She was hit by a car and passed in 1999 breaking Dean’s heart. 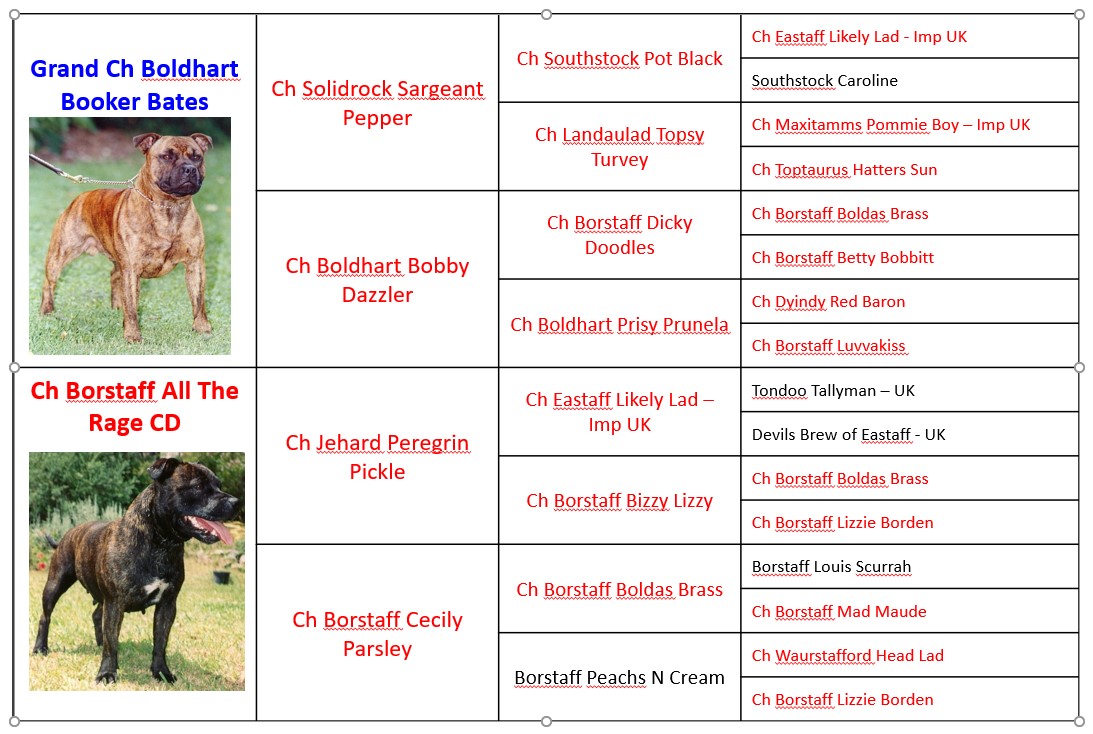 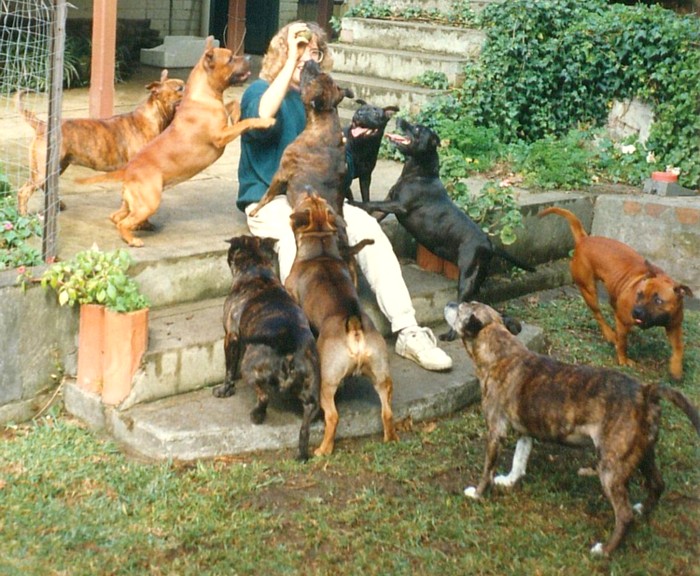 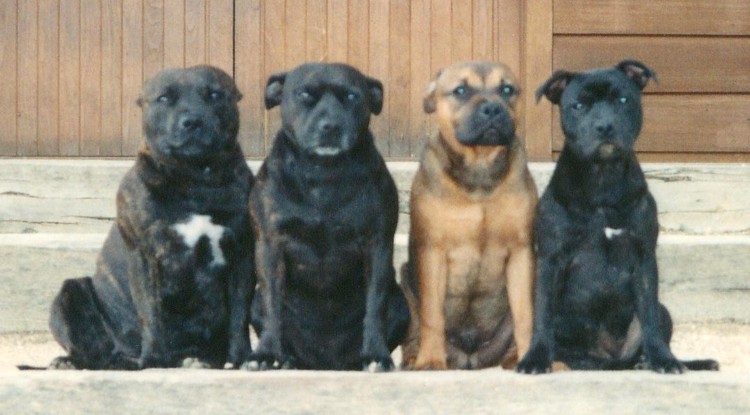