With this litter I had my first chance to do an outcross as Maddy was line bred so could afford to have an outcross done with her. I chose Sid as I thought he was a very nice young dog who could offer Mad a lot as he was oozing in breed type, had a good topline and front that Mad was lacking. I had always admired Lucy – Ch Reigate Satin Doll and though I had not seen much of Dez – Ch Elbereth Ned Kelly at that stage I had greatly admired his brother Red Harry. Through this mating I formed a great friendship with Karen & Graeme McIlwain (Leatherwood).

This litter was very successful in the fact that my own boy Grand Champion Ourgang Hell For Leather “Basty” came from this litter as well as Ch Ourgang Truly Unruly “Angus” (owned by David & Louise Tattersall – Staffbach). Other dogs in this litter who have challenge points but were not actually titled were Ourgang Mad About the Boy “Flash” (Don & Chris Forster – Aberstaff) and Ourgang Divine Madness “Frenzy” (Steve & Lisa Terry – Mobland). This left the final boy – Ourgang Mad Dog N Glory ‘Bart” (Andrew & Caroline Lebedew) who was in a great pet home in Swansea.  This litter was all named after Mad except the one I kept (named after Leatherwood) – how ironic.

There were a couple of firsts for me with this litter – one being my first caesarian and the next being my first cleft palate. There was a fifth boy who had a hairline cleft palate when born – probably about 1/5 of the mouth right at the back of the mouth and very hard to see it was so thin. The Vet and I decided that as it was so small that I would try to raise him because as he grew it could do one of two things – close over or get worse. Unfortunately it was the second option and I kept him going until three weeks of age and then he just started going down hill. It was certainly heartbreaking as by that stage he had personality plus and it is something I would never attempt again nor recommend anyone try to do. 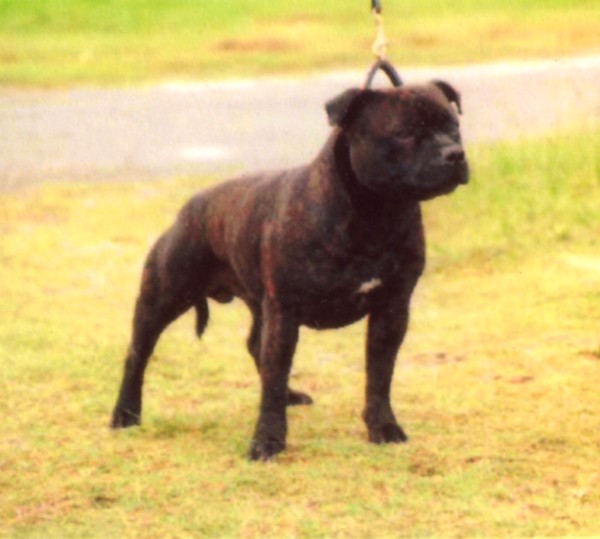 See Basty’s story  elsewhere in the website. All I am going to say here is that I chose Basty as he stood out from day one – he and the pup that died were the picks of the litter. I was not planning to keep a boy at all but I just couldn’t let him go.

Angus started off his new life with a bunch of Papillons in Newcastle being sold to a young man whose mother had Papillons. These were the people who were meant to get Basty but ended up with Angus as he was second pick in the litter. Brock ended up leaving him at home a lot with his mother who decided he would be better off in a home that would give him more attention – in stepped David & Louise. David had always admired Angus having helped Marilyn out a few times at shows when the Stafford and Papillon judging had clashed. I was happy to let him go to them so it worked out very well.

David campaigned Angus successfully to his title. Angus’ real forte was in the weight pull where he has won consistently, always willing to throw his heart into it as his mother had done. He also did well in the Lure days, winning fastest dog once only to be beaten by his niece and housemate Gema for Fastest on the Day. Angus was used at stud a few times and threw some nice puppies. Angus retired from the showring and thought he was king of the household in the Staffbach yard. 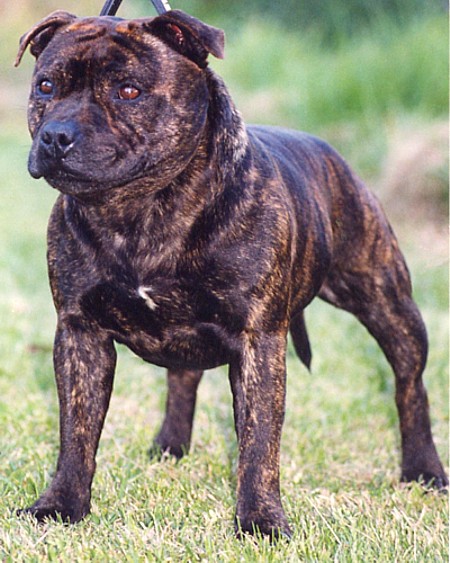 Flash started off being called Houdini as he was the first one born and sprinted out of the bed – aged about 1 minute and took off across the room. In the end mum had to keep holding him as we couldn’t keep him still! Flash, to me, is the most like Maddy in this litter and I was very tempted to keep him for exactly that sentimental reason. Luckily for me a brilliant home came along in the form of the Forster family and he was sold to the most loving home you could imagine.

Don and Chris are both nurses and did not have the time to show him. I showed him at his very first show in Junior which he won Reserve Challenge, RUBOB, Junior in Group and Junior in show, I was absolutely thrilled! Don & Chris were impressed but not inspired to keep on going however they allowed their friend Rob Orr to show Flash for a while with moderate success.

Flash sired three litters for the Forster’s under their Aberstaff prefix. They kept a red boy from the first litter (Aberstaff Oberon) who, to me, was nothing short of stunning and was certainly a dog I would have liked to use, unfortunately his early demise did not allow that. I would say that Flash was not used that much because people do not know he was there but I can assure you he could throw some nice puppies!

Flash was on the smaller side for a dog – around 15 inches, beautiful movement, level topline, cracking head and terrific bone. I would probably put him as second pick of the litter now that they have all grown up but would have preferred if he had a bit more leg, still you cant have everything can you & who am I to talk considering his mum & half sister. He sadly & unexpected passed away on a hot summers day of unknown causes, the belief being that it was snake bite due to the suddenness of it. 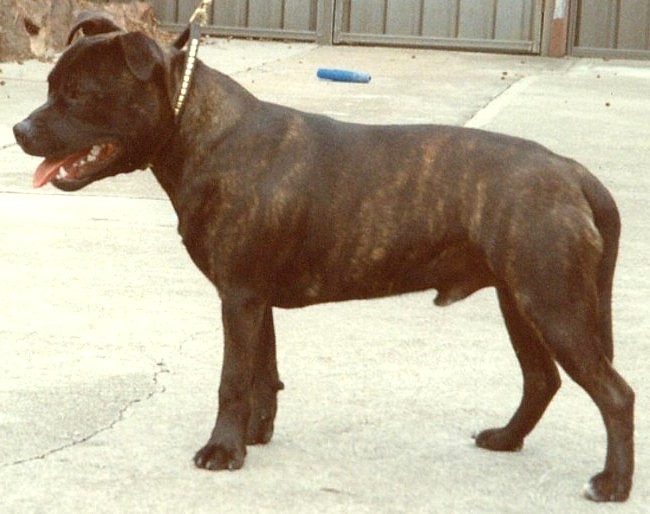 Bart as Andrew & Caroline called him was certainly a character. He was the active and noisy one of the litter and still was a mover to the end. As the Lebedew’s had young active kids I thought he would be a good one for them as he would play well with the children. Luckily I was proven right and he was certainly happy in his home.

Bart was the more athletic one of the litter and is similar to his grandfather “Dez” Ch Elbereth Ned Kelly in build. I must admit I haven’t seen as much of him as I had hoped and always manage to call in when nobody was home.

Frenzy was the only girl in a litter of stunning boys. She certainly had the body but never quite had the head of the boys and with a dog like Basty in the litter she wasn’t going to stay. She was given to the Terry’s as they were after those bloodlines to start their own kennel on the condition I could have a litter back – this was Litter 5.

Personally, I think Frenzy turned out a lot better than I originally thought, she has a massive spring of rib, great topline, good movement, her only let down being her head which was not of the substance of the rest of her. She did quite well in the show ring, gaining challenge points, but the Terry’s were not happy with her so they decided to place her with Steve’s parents where she lived out a spoilt life as all Staffords should. 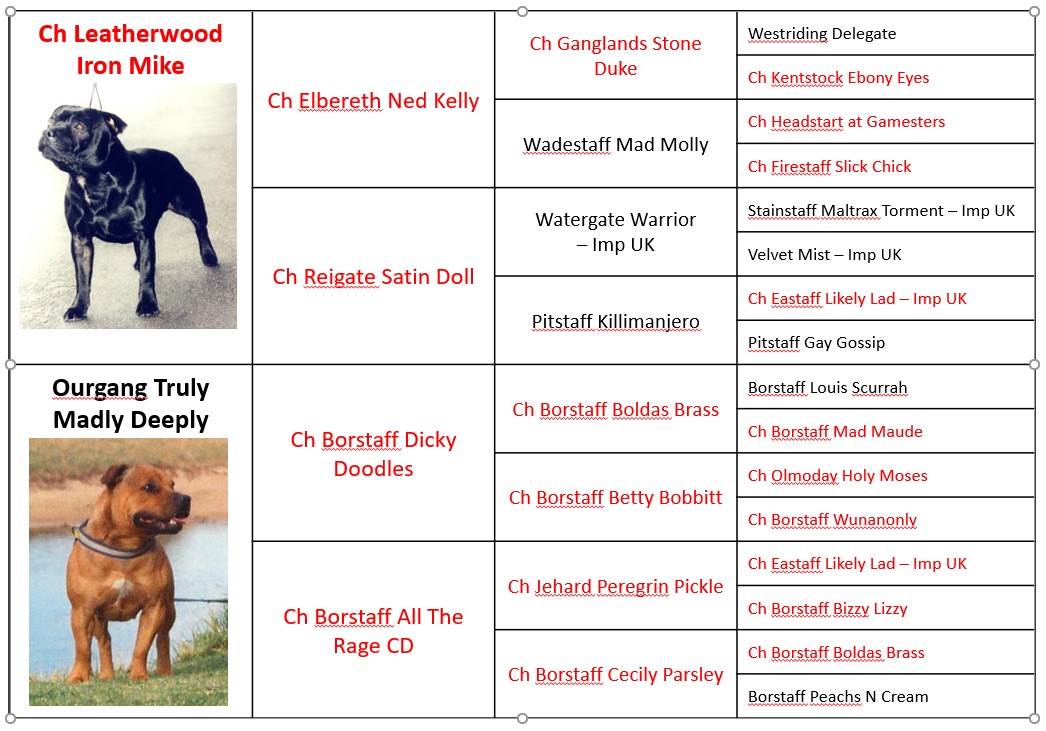 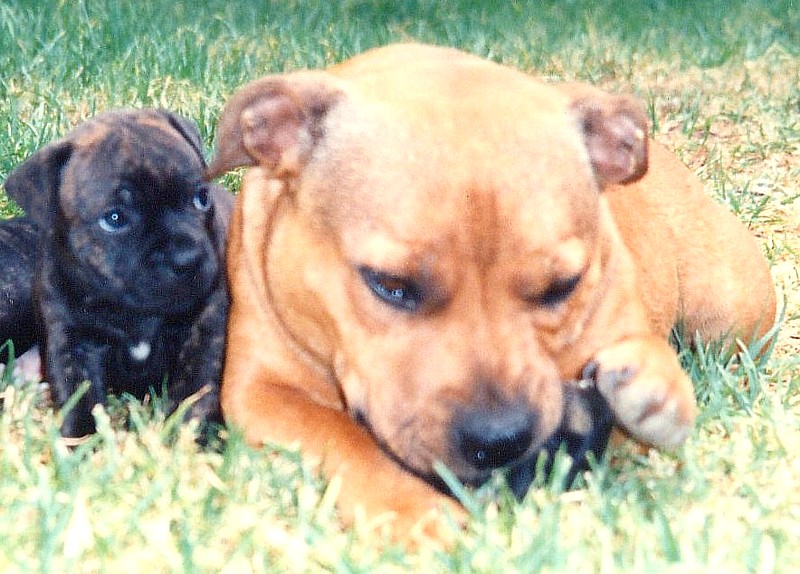